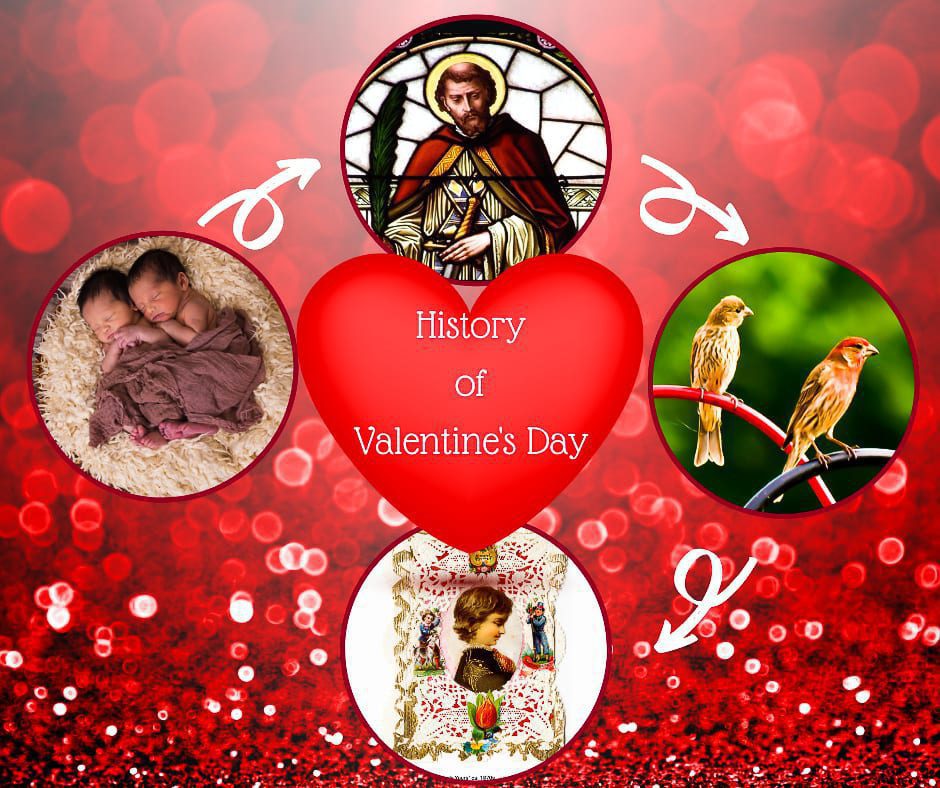 Valentine’s Day, February 14, is celebrated in the United States, Mexico, the United Kingdom, France and Australia. In the name of Saint Valentine, candy, flowers, gifts and cards are exchanged to show affection and love. But what is the history of Valentine’s Day?  Where did it begin and how did it evolve?

One popular theory is that Valentine’s Day is named after a martyr, St. Valentine, the date designating either his birth or his death around 270 AD. The Catholic Church actually lists three saints named Valentine, each with his own different legend. The common thread of each portrayed them as being kind, sympathetic, heroic and proponents of romantic love.  By the Middle Ages, Valentine became one of the most popular saints. https://www.history.com/news/6-surprising-facts-about-st-valentine

A Pair of Infamous Twins

Some historians believe that our modern day version of Valentine’s Day originated in ancient Rome as a fertility festival on February 15th called Lupercalia. This popular festival was a fertility festival dedicated to Faunus, the Roman god of agriculture, as well as to the ‘founders of Rome, the legendary, twins Romulus and Remus.

The fertility festival involved priests, animal sacrifices and included the ritual where young women put their names into an urn.  When a young man chose a name out of the urn, the young couple were paired for the coming year, perhaps leading to marriage.

The rise of Christianity outlawed the practice of Lupercalia, and at the end of the 5th century, Pope Gelasius declared February 14th, St. Valentine’s Day.  But the association with romance did’t come until centuries later.

Romance is for the Birds!

In England and France during the Middle Ages, February 14th was perceived as being the first day of a bird’s mating season, which inspired the tradition that it was a day for romance.  Geoffrey Chaucer, in 1375, recorded the first “St. Valentine’s day  poem ““For this was sent on Seynt Valentyne’s day / Whan every foul cometh ther to choose his mate.”

Valentine’s Day: A Day of Romance

The celebration of love on Valentine’s day began to be popular celebrated around the 17th century. It was well established by in the middle 18th century, where friends and lovers, across the social strata, would exchange small gifts and handwritten notes.  Technology fast forwarded the process of letter writing, and in 1900, printed cards make their appearance.

By the middle of the 18th century, it was common for friends and lovers of all social classes to exchange small tokens of affection or handwritten notes, and by 1900 printed cards began to replace written letters due to improvements in printing technology. In the 1840’s, the first Valentine’s Day Cards were produced in America.  Esther A. Howland became known as the “Mother of the Valentine” with her lacy, festooned pictures.

Whatever way you celebrate Valentine’s Day, it’s become a tradition to of show appreciation for the love we have in our life.

Thank you for taking time out of your busy life to read our blog. We welcome your thoughts and invite you to share it with someone who might find it meaningful.

For more in depth information on the history of Valentine’s Day: https://www.history.com/topics/valentines-day/history-of-valentines-day-2