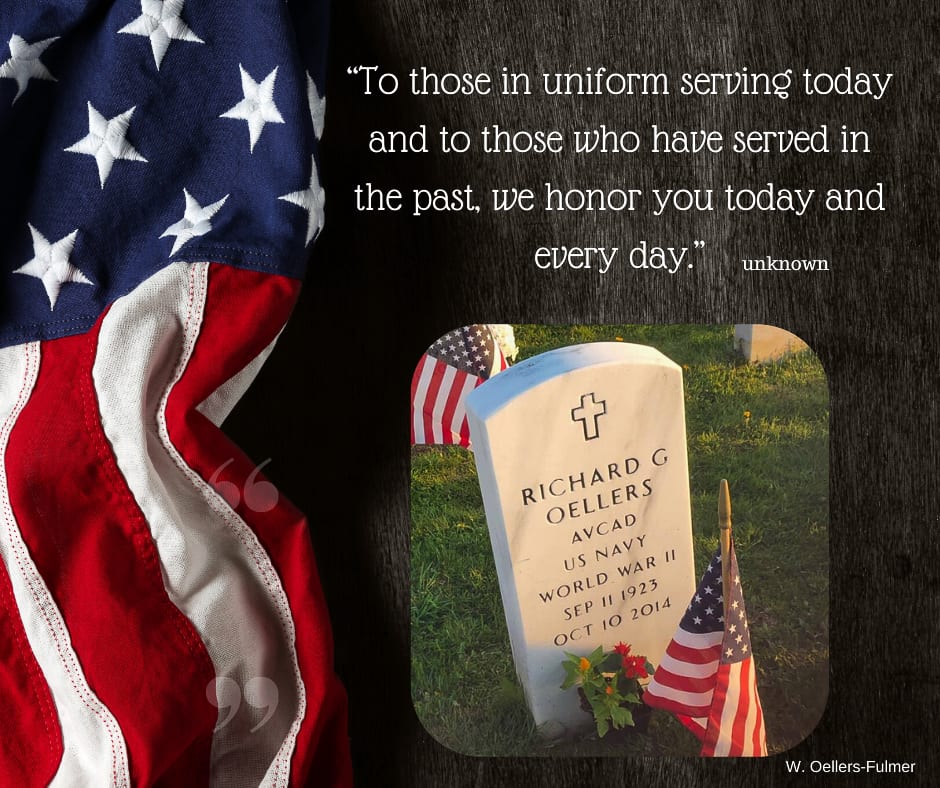 Memorial Day 2020: In Honor of Heroes

“A hero is someone who understands the responsibility that comes with his freedom.”

We celebrate and honor our military branches twice a year….Memorial Day and Veteran’s Day.  But the thread of their dedication weaves through the very fabric of our society.

My dad, Richard G. Oellers, was a veteran of World War Two, flying planes off a navy aircraft carrier.  He had been a college student at Princeton, manning the campus radio station when the news about Pearl Harbor came in over the airwaves. It was his job to take the devastating news and transmit it to all the other students and staff.  The implication and horror of the bombing inspired him to leave school and enlist in the Navy, where he remained until the end of World War 11.  The GI bill paid for the remainder of his schooling.  While he spoke fondly of his school years, he rarely ever mentioned the war, but had a life long love for aviation.

“Home of the free, because of the brave.”

My best friend Liz’s father flew 33 bombing missions over Germany.  She has his flak jacket with bullet holes garnered during near misses from the enemy.  He was only 23 and like my dad, rarely talked about his war experiences. Unlike the many who didn’t survive, we were fortunate that both of our fathers made it home.

“The willingness of America’s veterans to sacrifice for our country has earned them our lasting gratitude.”

I have never been in the armed services, fought in a war, or had the responsibility to keep our country safe.  Being safe is something we as Americans, too often take for granted.

When I was a child, Memorial Day was a major event, with parades, picnics, and fireworks.  In recent years, (not a pandemic year), Memorial day has become simply another holiday off to have sales, shop and get together with family and friends.  Somewhere along the way, we seemed to have lost the symbolism of what the day actually means.

“Veterans are a symbol of what makes our nation great, and we must never forget all they have done to ensure our freedom.”-Rodney Frelinghuysen

My dad joined the Navy, because he loved his country, believed in its greatness, and wanted to keep its citizens safe.  If he was still alive, he would be devastated to see the divisions that are now occurring with Americans turning against Americans.

We need to pull back together, to truly become the United States of America.  Memorial Day honors those who died in active military service.  They fought and died to keep our country safe from harm and strong.  In their honor, and in respect for all of those on the front lines in both the military branches and also in our society dealing with a pandemic, we need to make our country great again….with compassion, care, respect and tolerance.

Here are some additional quotes for reflection. If you have another one that inspires you, please share it in the comments below.

“Freedom makes a huge requirement of every human being. With freedom comes responsibility.”

“A hero is someone who has given his or her life to something bigger than oneself.”

“Patriotism is not short, frenzied outburts of emotion, but the tranquil and steady dedication of a lifetime.”

“There is nothing wrong with America that cannot be cured with what is right in America.”

“You will never do anything in this world without courage.”

“Our nation owes a debt to its fallen heroes that we can never fully repay.”