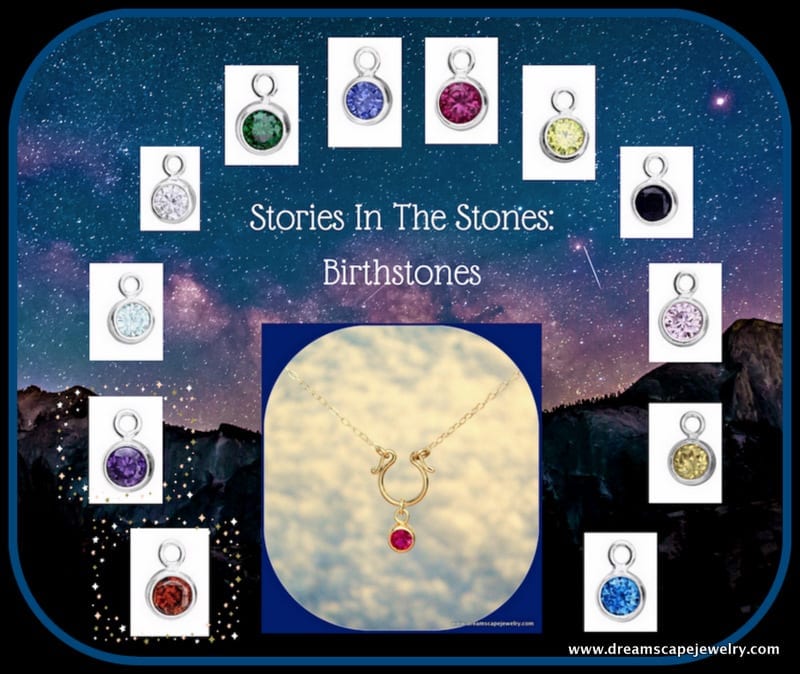 February 3, 2019: Stories In The Stones: Birthstones

All the luminous the coloured spectacles which the world in the immensity of space can offer us, nature has produced in miniature amongst precious stones. ~Charles Blanc

Gemstones shimmer, sparkle and add beauty and elegance to our lives.  They are precious, have both astrological and mythical meanings; and are believed to own hold unique healing powers and therapeutic effects.   But do you know that each birthstone has its own individual history and meaning? After a brief history of birthstones, we’ll explore the first two birthstones of the year.

Historians believe that the initial inspiration for 12 birthstones, (first mentioned in the bible), were the gemstones incorporated into the breastplate of Aaron, a prophet, high priest and brother of Moses who lived around 1500BC.  The 12 gemstones represented the 12 tribes of Israel and had connection with the 12 signs of the Zodiac.

There are other ancient cultures who incorporated birthstones as well: The  Mystical Birthstone List, (Tibetan-1000 years), the Ayurvedic Birthstone List, (1500BC), and the Astrological Birthstone List where legend had if you wore your wore your astral stone, you could tap into its hidden powers. In Poland, during the 1500’s, people would aspire to own and wear a different gemstone for each month to benefit from it’s unique healing properties. The modern Birthstone list we use today was created by the American National Association of Jewelers, in 1912.  Over the years there have been additions to the basic list.  While most months have only one birthstone, several months have two or more.

Garnet jewelry has an ancient history, dating back as far back as 3100BC when Egyptians used garnets in both inlays and jewelry.  They believed it was a symbol of life. Garnet is so durable, remnants of garnet jewelry can be found as far back as the Bronze Age. In the 3rd and 4th century, it was prized by the Romans.  Ancient healers and wisemen praised it for its healing powers and placed garnets in wounds.  Warriors wore it going into battle as a talisman for protection and others to defend themselves from both pestilence and plague.

Special Effects: Garnets have rich folklore. According to legends, garnets can bring happiness, peace, prosperity and good health to the home. It has been called the “Gem of Faith,” and it’s believed that to those who wear it and do good, more good will come. Garnets also represent deep and lasting friendships.

Amethysts also have an ancient history, rich with myths and legends.  Due to its wine-like colors, early Greek legends associated amethyst with Bacchus, the god of wine and was believed to help prevent drunkeness. In fact, its name comes from “amethystos”, which means “not drunken. Other folklore shared beliefs that the wearing of amethyst brought clear headedness and quick wits in times of battle or business. Saint Valentine was reported to have worn an amethyst ring carved with the image of Cupid.

Amethysts were once considered as precious as ruby, emeralds and sapphires.  Its rich purple colors were incorporated in both religious and royal jewelry for centuries.  Huge discoveries of amethysts in South America, relegated it to a semi-semi-precious status, but its beauty and durability has kept it a highly valued gemstone for jewelers.

The most important thing to remember is to choose and wear gemstones that have meaning for you. Whether it is your actual birthstone, an astrological one, or one you love for its appearance and or reputed powers, let it be the story you want to tell.

We’d love to hear your thoughts on birthstones in the comments below.